Home > XC > Final XC of the 2021/22 season: A stunning venue for a stunning performance

Final XC of the 2021/22 season: A stunning venue for a stunning performance 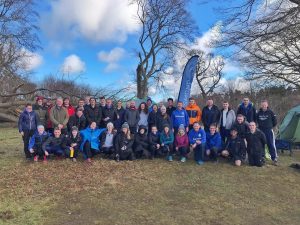 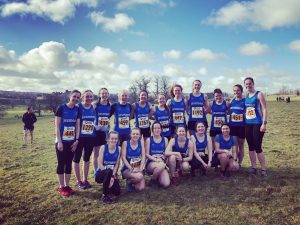 A record breaking 17 JJ females took the line at the wonderful XC course in Alnwick Pastures, looked over the by the 11th Century Alnwick Castle. A venue that had witnessed enough history of the years was about to witness the JJ women making their own history. The talk prior to the race was whether the women would be able to stave off relegation from Division 1 and keep their place in the higher echelons of the NEHL. We needed have worried. With Emily Green and Izzy Sharrock making their League debuts and Izzy her club debut, the women stormed the barricades and planted the JJs flag at the top of the Division 1 race. The first scoring four all got in the top 20. With the rest of the JJs women packing closely behind, the women blocked the other Division 1 clubs from getting anywhere near the top. A highest finish of any JJs team to top the highest NE division. Emily, Izzy, Sarah Bowen and Megan Rowland stormed round the course, but it would be unfair to just highlight those four. All the JJs did themselves and the club proud with an immense display of running. Emily Green’s sprint finish to overall the women in fifth place was immense, with a spectator standing next to me saying ‘wow, that’s a turn of speed!” Laura Chapman finishing place relegated Gateshead Harriers as had she passed the Wallsend Harrier in front they would have got down instead. Emily Pass using her marathon training strength pushed through the field chased by a ever smiling Georgia Beatty. Great to see Emma Curtis making her NEHL debut as well.

With the JJs women finishing top of the League race, it meant that the women finished 5th in Division 1, another first for the JJs in a history setting day. Thank you for every female JJ who ran in the NEHL this season. This is all of your achievement. We are very proud of you. 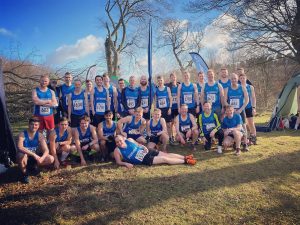 With men going after the women’s race, the men knew that they would have to pull out all the stops to not hide in their shadow. This they did with aplomb. A record Twenty-nine male JJs took the start line, with 9 making their NEHL debuts including Dave Watson, who after 9 years as a member, finally succumbed to all those announcements on club nights and decided that it was time to don the JJs vest over the country.

Joel Birks left off where he finished at Thornley farm and finished in the top ten, this time starting in the medium pack and setting the JJs fastest time of the day. Diggory Slee making a great debut run got inside the top 20, ensuring promotion to the medium pack next season. Great to see Ben McMain back racing following his injury problems but looking back on track. The race to get in the first six was tough with another returnee from injury, Mark Critchley just missing out. Niran Patel was just behind him, having taken a break and stopped his watch, being the only JJ on the day with a running time and an actual time on his Strava. Am sure Seb Coe never did that……..

The men had an outside chance of promotion but it wasn’t to be with the men still acquitting themselves well on the day with a 5th place finish and a 4th place finish in Division 2 at the end of the season. The highest the men had ever finished the season to add to the women’s history making. To think in 2018, we were struggling to complete a men’s team at the same fixture. Well done to every male JJ who pulled themselves round a NEHL fixture this year, sometimes in complete mudbaths. We should be proud of our achievement this season. Can we go better next year season? Time will tell.