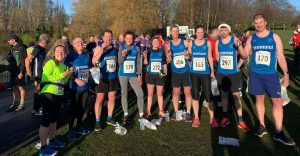 A cold and frosty morning greeted the nine JJs, fearing that instead of racing flats, Ice skates might be better. On warming up, it was clear that Saltwell Harriers, the host club, had taken full precautions to get the race on and had gritted the undulating course round Saltwell Park and it was good to go. Billed as the oldest road race in the country, three and a half laps of Saltwell Park are a good challenge on any day let alone a freezing day. The winner, Callum Johnson of Gateshead Harriers and Great Britain, may have been wearing ice skates as he raced round to a new course record of 30:06, and for the second week running, lapped the JJs men as he had a week previously at the NEXC champs. Our first finisher was Joe Inns, under par due to having his booster the day before and not feeling great, he ebbed and flowed round the course to finish in 44:21. Angus Miller and Simon Wells had a battle royale round the tough course with the former holding off Mr Wells, as his class were shouting and encouraging him round the route, the benefit of working in a Gateshead school for extra support. Laura Chapman was next home and 14th female and 4th senior woman. Liz Heard, continuing her 365 days of running in 2021 was 9th senior female while Geoff Blair had a great run to finish 6th M60. Rob Dooley, Sophie Reynolds and Gerry Rowland were all in under 55 minutes on a tough course. The small bottle of whisky and the whisky glass were a good finishing prize on a cold day. A great way to bring down the curtain on an eventful year of racing for the Jesmond Joggers.