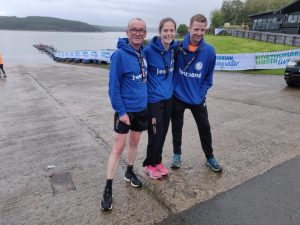 Twas a wet wet day and 3 intrepid explorers (plus 2 JJs who made the own way there) set off to explore the highs and lows of Kielder. After a brief standoff with a taxi and overcoming the navigational challenge of great park they were off.

A full rainbow over Kielder gave an indication of what was to come – and by that we mean there was just a lot of rain.After managing the toilet queue and the various buses to the start we were sufficiently chilled, which gave the dilemma on what to start – there was a definite split between vests and shorts vs waterproof coats, hats and gloves. I’m still not sure who was right.

After a bit of a delay while they waited for all the buses to arrive we were off.  The stunning views were slightly hampered by cloud but as the run went on the weather improved and although a few drizzly patches, not the torrential downpour that was expected. Definitely an undulating run but mainly on forestry paths so puddles and leaves but not too much cross country until around 10 miles where a large stream flows across the path, Tom attempted a river jump reminiscent of Farringdon, however this triggered cramp despite how many dodgy salt tablets he’d been chewing on. The rest of the race was uneventful, lovely paths, lots of marshals and water in weird, almost undrinkable cartons. A sprint finish for me, managed to get me from 5th to 5th so that was effort well spent (the announcers had said I was in a 3rd/4th battle) and chip timing did put me in 4th female overall so I’ll take that.With a goody bag that had 2 energy bars, Maoam sweets, Epsom salts and a sufficiently high vis T-Shirt to make Simon happy on club nights, we headed to the very well stocked cake stall and finally changed out of wet gear just in time for the sun to come out. A good run, well organised, sufficiently challenging to make me happy not to be doing the marathon and enough post run treats to push you the final mile. One I’ll (probably) sign up to again next year.Results (gun time):

Final XC of the 2021/22 season: A stunning venue for a stunning performance