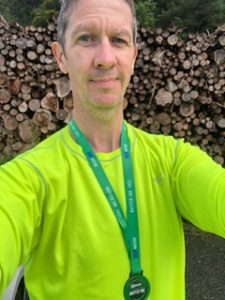 Who doesn’t like the 10k race distance? No one, that’s who. The 5k is over too quick, a half marathon needs some application and some of us know by experience or reputation that the full fat 42k distance is “serious”. Anyone who does ultras…you have my respect and my raised eyebrow.

After my experience at Ilkley Half I have to be honest and say my confidence took a bit of a knock. Yes, it was a tough, meandering course and “Undulating” (TM of every road event EVER), but I thought I was quicker than I actually was. Had I lost whatever pace I had? Moderate though it was, I had flashes that I had peaked in 2019 before succumbing to Achilles injury and my cake n wine in lockdown omnishambles.

Due to being a joint carer of our dog for his post op recovery (he’s fine, thanks for asking) I took a week off from all exercise after that. No gym or running…even dog walking was necessarily curtailed while he found his paws again. All very weird for someone who has been regimented in their run routines. So, when things got a bit easier to manage at home I popped out for a 5k around the Town Moor. And it was MUCH quicker than pre break. My times on Strava started mid 2020 and has basically mapped the trough of my downward performance, so to get a PR cheered me up. Nice to get to something like I know I can do. Obviously the break helped. And like any runner I overconfidently went out the next day to do five miles. But hubris was not at home so again a Strava PR. Lovely. Just what I needed.

And what’s this? Club anniversary run a few days on? Don’t mind if I do. Tad under four miles and spent mostly following behind David club secretary and I was waaay faster than either of my previous tagged ‘chuffed’ runs. That corner had been turned. The door to feeling competitive was left ajar and I jogged through. Ok then. Let’s find a race.

Something local, not too fussy…no, missed the ballot for GNR…ooh, ok. Matfen 10k? Hmm, it’s close, inexpensive and of course, who doesn’t like the 10k race distance? Bang on, sign up, away we go.

The drive up was fine, A69 then some country roads through the light rain before a turn into the race car park. In fact it was a timber wagon drop off lane. The parking attendant was telling everyone that he planned some intricate 45 degree angles for each car, but it was failing and it was all our fault. Five minute walk through the drizzle to the village hall to register then back to the car to take my mind off the race. Matfen itself is a typically pretty Northumberland village, with a central village green kept that way by the rain no doubt. Thankfully the start line was seconds from the car park, so couldn’t be more convenient. Meantime the rain continued to fall. Had I mentioned the rain? 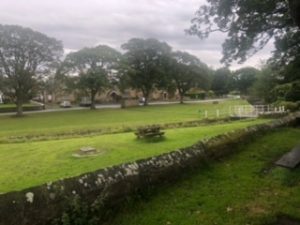 Time to get in race mode, some stretches and squats to get warmed up and the stroll to the start. A racer’s dad teased us by carrying a brolly and refused to adopt me temporarily to offer shelter. The Run Nation event starter talked us through the route: circular, anti clockwise with the finish line some 200m further than the start line. As covid precautions continue we were all on chip timing so the gun start (hooter in this case) was just for show. And away we go. And then hard stop as someone in front halted to collect their dropped phone. So…here we go again (mentally I knocked off 10 seconds due to force majeure).

The course was typically Undulatingtm, I mean it’s country roads so that’s to be expected, but nothing for the first four kilometres that proved overly challenging. The rain eased off and the puddles weren’t too bad. It wasn’t a closed road event, but the occasional car kept their distance/ So I settled in to the 6.2miles taking in the race experience and countryside views. Hedges to left and right, the odd farmhouse, some hamlets. I had heard of an incline at around halfway so was looking ahead for it and was prepared to see some competitors walking. As I felt strong I shortened my stride, increased the workload and pushed up, overtaking a handful of others who looked to be struggling. “I must be awesome”, said my inner voice. “No…no you’re not” said the other voice. Cresting the incline led to a nice downhill. And some of those overtaken going up went past going down. “Told you so”.

I’m usually quite cautious on downhills but I opened up to take advantage of every runner’s friend: gravity. As the road levelled out I caught and passed most of those who had previously slowed on the hill. “Hah, so I am awesome!”. “Just don’t, ok?”.

Second half was much less up and down, and at this stage I was fully warmed up into the race and felt really good. I had deliberately not looked at my watch for my pace in case a) I was slower than I felt the effort warranted and b) I was going as fast as I could, so it’s not as if I could do anything about it. But I enjoyed the feeling of putting in an effort during a race and that it was within me to keep up this pace for the remaining miles. That race buzz was back.

Marshalls kept us on the right line and some supportive shouts to keep going. Then before you know it the finish straight was in sight. And oh yeah, 200m further on than the start. More Marshalls and first aiders cheered us on so I was encouraged to one final gut busting push to the end. “King of the world, Ma!” And then I was nabbed by another runner 30m from the line! “Not a word, ok?”. “Who, me?”

Watch stopped and checked my recorded effort and well, I was really happy with what I saw. Just over 5min/k was much better than expected over an up and down track, especially with a sharp, steep hill in the middle. Lovely. Just what I hoped for. Walking back to the car park I had a nice chat with some other runners talking over our experiences.

After all, it’s the community of running that holds an appeal few other sports can match in my opinion. We all have our back stories, our mini and maxi challenges, the ups and downs of getting to the start line and a reflection on how we did. For most runners the challenge is us against ourselves. On this occasion I felt I got the win.