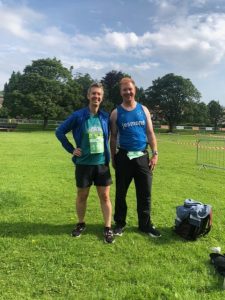 “You’re getting up at what time? On a Sunday? To travel how far?”
5:50am; yes; about two hours drive there and the same back.
“Will you win?”
Erm
So on a brightish morning Angus and I set off for a mini JJ adventure.  The race had been rolled over from last year like so many others, but in the land of my in laws I felt I needed to represent and support. The journey itself was uneventful, at what some might call “Sunday, stupid o’clock” meant few others on the road.
The parking was on a rugby field and the recent warm weather gave us no problems in navigating the turf. A five minute walk over the road and plenty of time to assess the race ahead. The race was organised by the local round table, who asked for new members (male, 18 to 42, which seems fairly arbitrary to my simple brain). But credit to that narrow demographic (and ancillary volunteers), the race arrangements were excellent. Bag dropped off, a quick squirt of sun screen (I know, Yorkshire, right!) and into the approximate finish time pens.
Race pens, apart from elite groups who started on track, were herded from our groups one at a time in slow order 200 yards to the start line and away we went.
The route started through the pretty West Yorkshire villages and it seemed everyone had come out to cheer us on. Pots and pans clattering, bells and encouragement along every street. And when the rain started (I know, Yorkshire, right!) the brave souls continued to show support.
And then the first cheeky incline; not too bad and early enough in the race to not find it too challenging. From thereon-in a story of undulating roads, enthusiastic locals and friendly competitors. Which is where, at around the halfway mark, those undulating roads caught up with my lack of training. A lot of the last 12 months has been recovering from injury and frankly fitness was not where it should be for 13 miles on a hilly track. But, here I was and by this point it was quicker to plod on. And I didn’t want to get passed by a team dressed as penguins.
But the reward was some stunning scenery. After the track turned back, and a “little hill” (er, it’s not) the space opened up to a simply wonderful view over the River Wharfe. To be honest, it was breath taking. And not just because of the effort to get there!
The final stretch flattened out and a “sprint” to the line, bordered by more cheering locals to the end. I was done in, determination and some bottom of the well grit was somehow found to get over the line. A nice medal, water and a somewhat underripe banana was the prize, but the views and surprisingly happy memories of a tough event more than made up for that. I’d fancy coming back here again for sure. The event was as welcoming as could be and hopefully next time I’ll be able to tackle it in full fitness. Thanks for the inclines and views, Ilkley. 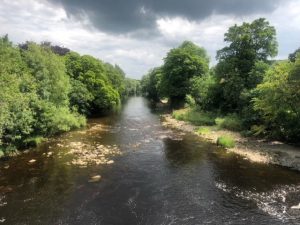