As it happens the Fates and some sporadic marshalling led to more Red than Green by the end of the morning. 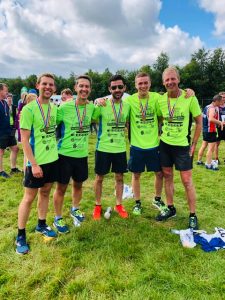 The Hexham Running festival had planned a 3k fun run, 10k plus a half marathon. The novelty for the 20k runners was an optional challenge of a “red” route: namely going up an attractively named “heartbreak hill”. For the less brave there was a “green” way around that covered the same distance but without the hill. That was the plan.

On the drive from JJ HQ to Hexham, conversation soon turned to the race ahead and what we looked forward too for our personal challenge. At the risk of hubris I admitted to wanting a PB. My maxim of playing it down and saying “ooh I dunno, let’s see how it goes” was for some reason bypassed in favour of telling my team mates. Immediately I regretted saying it out loud. I had some curiously superstitious reason that somehow the words said aloud now had corporeal form and in some real sense that added weight to my legs. Quickly I added my universal caveat “but I dunno, let’s see how it goes”. I hoped the words were now diluted and I was safe again to pursue my PB. The promise of a relatively flat track sounded like the right place to achieve that.

Starting beside the car park area (a farmer’s field) on a mild day with promise of gentle rain, the 10k runners were to set off first. The half marathon would start 30 mins later. And so my queue for bib and chip timing shoe strip began. And began some more. And some more…eventually despite the charming company of my friend (who was supposed to run but went and saw Bob Dylan instead of training and rocked up in guilt/supportive mode) and Izzy led to a realisation that 20 minutes in we barely moved half that in yards (times by 94.4% for metric). Mild panic looking at the increasing numbers on the start line took hold. Clearly something wasn’t going to plan. Time was ticking and my race hadn’t even started.

Eventually bib and timing chip was claimed, quickly attached and place on the start line taken. A hello to fellow competing JJs, handshakes and my now usual “in bocca al lupo “ shared (really not superstitious) before getting my head straight…”3, 2, 1, go!” What? I just got here! And away we went.

From the shadow of the Egger factory the route took us onto the road into Hexham, up a short, sharp climb towards the town and eventually past the lovely Abbey and market centre. Back out again and towards the train station we went past the start area set off on the road to Corbridge. Some mild inclines came and went and now I was enjoying a good pace on a pretty country road. Into Corbridge we were directed towards the Tyne and from tarmac to “multi terrain” surface. The unexpected change made for an interesting break in tempo. The earlier sprinkle of rain made me cautious on the grassy downhills but there were no tumbles or slips. From the open roads to the verdant close and humid back lanes, narrowing all the time. I couldn’t see the runners in front at this stage and with unsigned options on which way to go in the labyrinth it came as a relief to see a marshal indicate I was on the correct path.

An all too brief turn along the Tyne led back to the main road towards Hexham. Then things became…interesting. Marshals directed me to turn right.

The race starter had announced the first wave to set off would be a “green” pack and the red route would get the tougher challenge. So it came as some surprise to be faced with a mile of 15% incline at 8 miles in. If this was the green route, I’m glad not to have gone red. I tried to be sensible and shorten stride but this beast was not going to be tamed so easily. Runners all around succumbed and began walking. I soon gave in and did the same. Every turn I yearned to see the climb stop and level off, but all in vain. It didn’t stop. This was probably the toughest hill I had attempted in a race and it was chewing out my fellow competitors like a surly teenager with a mouthful of bubblegum.

Like all good things this came to an end and the road levelled off. Breathless and with aching legs I pulled myself together to get going again. Only for a painful stitch to hit and I had to ease up to work it through. It passed and I could get back to business. A more forgiving incline approached but the sight of runners coming back towards me at least gave heart that there was a downhill stretch to reward the effort. Then a really fabulous view over the Tyne Valley brought back to mind the beautiful location.

At the top we were turned back around and after an increasingly steep downward route we rejoined the main road to Hexham. Five kilometres to go and recovered from the arduous climbs I could get back into race pace. Passing by the same marshals who had directed me up the hill (I think I grimaced a bit) the homeward stretch beckoned. A pleasingly gentle downhill helped as the end hoved into view. A final sprint to the finish on the car park field and the race ended for me.

I checked my watch. I got my PB! Four minutes off my previous best! I was so thrilled that the beasting on track was almost forgotten. Catching up with other JJs it seems they too had been misdirected to what we established must have been the red route. Very soon the bemusement of going the hard way round gave way to joking about it. The post race photos were cheered with “red route!” and the glow of achieving my best half marathon eased the pain.

Would I do it again? Yes. Closed roads, lovely location. But next time we’ll not Zoolander it and let’s go left. 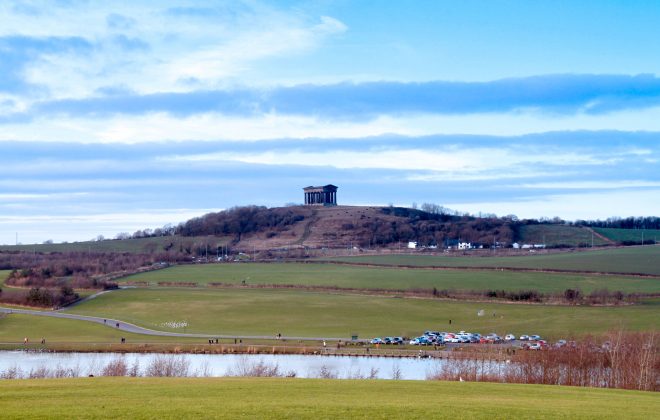