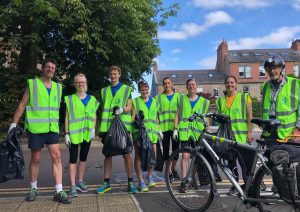 (to the tune of The Wombles Song)

The ploggers of Jesmond Joggers are we”

On Sunday 14th July seven JJs dragged themselves away from the tennis, cricket etc for the inaugural JJs plogging hour (well, hour-and-a-half).  Stella Postlethwaite, one of Jesmond’s councillors, and the ‘Keep Jesmond Clean’ group, initiated the activity with us during Newcastle’s ‘Big Clean up’ weekend.

The term ‘plogging’, literally jogging and ‘plocka upp’ – picking litter – was started as an organised activity in Sweden around 2016 with the term coined by Swedish native Erik Ahlström (see www.plogga.se).  It has though recently become a bit of a fad in many of the large European cities.

We cleaned the streets from Jesmond pool through to the Great North Road and back through Brandling to the pool.

Many coffee cups, their plastic lids, cans and bottles … and hundreds of cigarette butts … later, and we had a good number of sacks full.  Perhaps the most ‘exciting’ finds of the day were two odd shoes (opposites sides of the GNR) and a pair of socks!

My legs are reminding me today of how much of a workout you get from bending down, squatting, stretching and then running to catch, or at one point, attempt to find (!), the rest of the group.  My effort though was nothing compared with Gemma’s lunges.  They really were well impressive!

I’m sure we’ll be out again to plog more in the future!