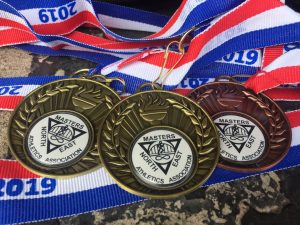 I’d be lying if I said I hadn’t been looking forward to this. Because I had. For months. But the weeks of waiting, obsessively checking the start lists every half hour and scouting out the competition were over and it was finally the day of the 2019 NEMAA Track & Field Championships.

For those who are too young for this to be on their radar, NEMAA is the North East Masters Athletics Association. It’s open to ‘veteran’ athletes over the age of 35 and the competitions are within 5-year age brackets from 35-39 all the way up to 80 and over. The Track & Field Championships comprise the full gamut of events from throws and jumps to sprints, hurdles and distance races. I’ve been telling anyone who’d listen that I’ve been treating it as my own personal Olympic Games but I think a more accurate description is that it’s a school sports day for old people.

In true Olympic/sports day spirit I’d signed up to do four events. Originally, I just wanted to do my favourites: the 1500m and the triple jump. However, these two events had been scheduled at the same time so I added the long jump and the 800m to my list just in case I had to choose just one of the events that clashed and ended up missing out altogether on either jumping or running. As the long jump was the first event scheduled and the 800m the penultimate race on the track this meant I’d essentially be there for the entire day.

And so, after rising early I was on the Metro by 9 AM heading from Jesmond to Jarrow. When I arrived, Monkton Stadium was bathed in glorious sunshine. We really couldn’t have asked for a better day.

After a quick warm-up I was ready for my first event, the long jump. It’s something I have a vague recollection of doing when I was maybe 14 but it’s just running and throwing yourself as far as possible, what could possibly go wrong? Well, I got the speed down OK, hit the board flush, got what I’m told was a lot of height on my jump but couldn’t quite get the landing right. It’s apparently good to jump high if you want to jump far but from those heights it can be a long way back down again. At one point I came down very hard and so uncontrolled that I nearly landed on my head and gave myself whiplash as a result!

Despite ending up facing backwards after landing on numerous occasions (don’t ask, I don’t know how it happened) by the time I got to the sixth and final jump I was getting the hang of it and landed a jump of 4.76 m (with a very helpful tailwind) to win the M35 competition by just over ten centimetres. Chris Lawrence can rest easy that his club record is pretty secure. For now…

With the obligatory social media posting of my gold medal out of the way I had an hour to hide in the stands from the now a little too glorious sun and watch some very entertaining hurdles races before my next event.

As it turned out, the track events were running way behind schedule so there was plenty of time to get three triple jumps (is that 9 in total?) in before the 1500m. We were joined by the ridiculously youthful M55 European triple jump champion Julien Gittens of Leeds, who put all of us youngsters to shame with his over 11 metre jumps. His advice to us all was apparently to ‘run faster’. If only I’d thought of that.

For me there were landing problems once again and on my first jump I put my arm back to lift myself out of the pit leaving a perfect hand print for the officials to measure my jump from. I did eventually get into the swing of things and, although the competition wasn’t as stiff as in the long jump I was happy to add 20 centimetres to my PB, jumping 9.69 m come first in the M35 category.

Suitably exhausted and covered in sand, it was time for some middle distance running. The 1500m is my all-time favourite event but the M35 category is incredibly competitive in the distance races so I

knew this was going to be very tough. Before my heat there was the opportunity to watch double M55 World Indoor Champion Guy Bracken of North Shields Poly take on the world M55 record for the distance. He came up a little short on this occasion but still put in a blistering 4:22 mins! I’d be over the moon to even get within 20 seconds of that.

Inspired and intimidated in equal measure I lined up with other M35 and M40 runners for the final heat. It took me from the gun to around 200m to know for sure that today was not going to be my day. I just couldn’t keep up with the pace and lost track of the leaders before the end of the first lap. The quick start made the rest of the race very hard but as I rounded the final bend I could hear some familiar voices cheering me on. The cavalry had arrived as more JJs showed up for the afternoon events. This gave me enough encouragement to power to the line and finish in a not-too-shabby 4:54.3 and 6th in the M35 category.

The aforementioned late-comers were Ian McDonald and Alex Ramshaw, here to compete in the Open Mile race, and Geoff Blair and Simon Wells, looking forward to the final event on the track, the 5000m. Before these there was just time to take in a few more events including a brilliant M35 200m final with the gold and silver decided on the line and both runners clocking sub-25 seconds.

With the sprints done for the day it was time for the Open Mile, the only race of the day to include runners under the age of 35. The race was rather unsurprisingly won by local legend Sparrow Morley of Tyne Bridge looking very comfortable as he held off Darlington’s Paul Allan in the final straight. Alex Ramshaw, resplendent in his brand new racing spikes in JJs’ blue and white, put in a great shift finishing well below his six minute target in 5:48.7. Alex was followed closely by Ian McDonald, who metronomically maintained his 6-minute mile pace to the end to finish as the fastest M50 in the event in 6:01.8.

Between the mile and the 5000m there was one more event for me to do: the 800m. It’s not my favourite, it’s always painful and the field was once again incredibly competitive, but I felt like today wouldn’t be a success if I didn’t bring home a medal for an actual running event. We are, after all, Jesmond Joggers not Jesmond Jumpers.

The first lap was once again incredibly fast, as you’d expect from a field that contained so many of the same athletes as ran the 1500m. Fortunately, there are only two laps so there’s little time to think too hard about how far there is left to go (to be honest I find it hard to think at all at those speeds). With about 200m left I could feel the pull of the line and started to throw my arms around like I was swatting away a wasp and somehow held off the two runners behind me to finish third in the M35 category and pick up that running medal. It may be bronze but it’s definitely the one I’m most proud of.

I was pretty relieved to have nothing left to do now. For Geoff and Simon though the competition was just beginning and 12 and a half laps of the track awaited them in the 5000m. Due to some creative administration, they were not in the same heat together as Simon and the M50 cohort were placed in women’s heat and Geoff and the other M55 athletes were in the second, faster heat with the M35 runners. Perhaps the races were seeded according to their Blaydon Race times.

After setting himself a sub-20 minute target, Simon started off steadily and ramped up the speed in the second half of the race to finish in 19:38.3 picking up silver for the second year running. In the faster heat, competition for the M35 and M40 medals was fierce with the two eventual winners finishing within a second of 16:05. Despite running an extra half lap to make it to the start line in time for the gun, Geoff Blair ran an absolutely storming race to finish under 20 minutes for the first time ever in a time of 19:56, earning himself the M55 bronze medal.

And with that the championships were over for the JJs with what must be a record medal haul of two golds, one silver and two bronze. I was very happy to see more of my club mates out there on the track and I definitely appreciated their support. The event itself was incredibly well organised and went off without a hitch. The officials were amazing and really friendly and I saw so many smiling faces amongst the competitors. I love that athletics and running events in general attract the most positive and sportsman-like people. There’s so much abundant encouragement that it never really feels like a competition, just fun.

As I sit here typing this with my stiff hips, sore glutes, sunburned shoulders and what is probably a severe case of whiplash, I wonder whether it was all worth it. Then I glance over at my medals and think, yes. Yes it was. Same time again next year everyone?

Epilogue: I feel like that Jesmond Jumpers joke was too good to only use once. Therefore, I’m planning on forming a breakaway club of that name in the near future. Chris can come too. 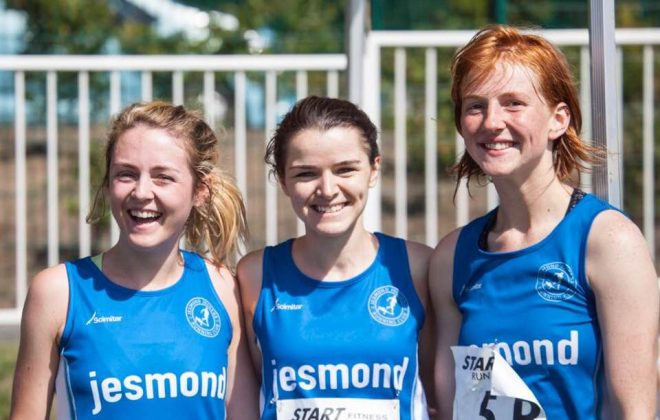