Home > News > The Stirling Marathon (with apologies to Barry White)

The Stirling Marathon (with apologies to Barry White)

Stirling, you were “my first, my last*, my everything …”

(* I reserve the right to change my mind!)

Stirling you were “my first” road marathon, and Si’s first marathon for 19 years, and you certainly took pretty much “everything” that I had in me!  A relatively flat course I was told – that the last time I believe you Si! 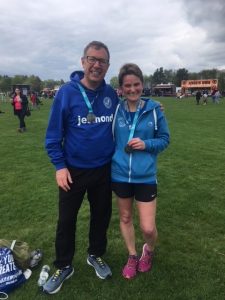 It’s a couple of weeks on now and the memories are both fading but “You’re my reality, yet I’m lost in a dream”.  My legs have recovered but still ‘protesting’ they tell me when I push them.  They assure me that they no longer feel “like a first morning dew on a brand new day” so I’m keeping those ‘well, maybe … possibly … probably’ ideas to my head at the moment!

After a quick whip round parkrun on Saturday morning (don’t tell Si!) it was off to Stirling to run our London Marathon in the North.  We were joined by Storm who was keeping us company by doing the half marathon … ‘with a bit more planning I could have kept Storm company’ I kept thinking as we drove up!

After carb loading in Stirling city centre on Saturday evening, and a reccy on where to park on Sunday morning, it was back to our Premier Inn “camp” at Robert the Bruce’s victorious Bannockburn.  While Si and I retired to our comfortable rooms Storm decided he needed the full Bannockburn experience and so his ‘camp’ was literally.  No idea how he ran the Half after a night bivvying in the Premier Inn carpark.

While we didn’t, thanks goodness, have to survive the ravages of Bruce’s army, we did have to survive an early alarm.  I did feel a little bit guilty as I boiled the kettle for my porridge at 0550 while Storm cooked up his gruel on the primastove outside!

A 0700 depart from Bannockburn saw us wandering in a relatively warm sunshine to Kings Field for the 0830 race start (and to no queues at the toilets!!)

After the amusement of being referred to as the ‘Elite’ runners (well that certainly wasn’t how I was feeling!) while waiting in the starting funnels, “the hammered horns resounded, and the standards of war were spread out in the golden dawn” (Chronicler Walter Bower’s description of Bannockburn).  We were off.

I can’t say the race had quite the drama of Robert the Bruce’s defeat of the English, but it certainly had a better ending.  That said it may have been dramatic if I had blown up as Si feared that I may after I stormed the first steady downhill to Blair Drummond.  He was though off into the distance, after an initial wobble, as we approached Doune and the first of the hills (well maybe they were ‘undulations’!), that had become mountains by the time we reached Dunblane at 12 miles and by Stirling campus at 20 miles, had grown to become “Munroes”!

Much of the race now seems a little bit hazy, unreal, something that I can’t quite grasp, that I remember in odd flashbacks (some good, some less so!).  There are of course though moments that will stick in my mind forever:

I didn’t have the energy to raise my arms as I crossed the line (uphill again!), but instead tears ran down my face.  Thank goodness no-one I knew was there and there wasn’t a finish line photo!

After locating the luggage bus, it was then to find Si and Storm.  They had missed me, and we were waiting by the line for me to finish … starting to worry that I had indeed blown up!

Was it “the answer to all my dreams”?  Maybe.  I shall though remember, Stirling, that

“There’s only, only one like you
There’s no way they could have made two

My first, the last, my everything
And the answer to all my dreams
You’re my sun, my moon, my guiding star
My kind of wonderful, that’s what you are”

The night before we discussed times, in which Kate said that she wouldn’t get near 3:53.  That time would bring her a good for age time.  In fact, she was right; she was nowhere near it (much faster).  Her performance would bring her the Jesmond Joggers performance of the month for May in a very crowded field.  Kate set off in determined mood and it wasn’t until 6 miles in that I finally passed her.  The weather was kind to us and the course, not as hilly as described by Kate, well not until the last 6 miles but that might be my memory playing tricks on me.  Those last six miles were tough, trying to keep focused, I finally finished in a time that looking back I would be pleased with. 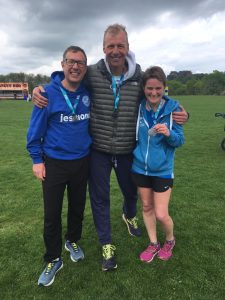 orm gave me a big bear hug and that was the end of my fifth marathon. Where next? I have the marathon bug back.

A big thank you to Kate and Storm for providing great company. Sadly, the Stirling marathon will not take place again.  The Great Run Company having decided that’s the end of the race.  A real shame as it was far from the madding crowd.