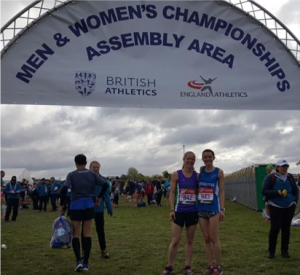 If someone had told me 5 years ago I’d be running a marathon this year, I’d have laughed out loud. I hated running, and couldn’t do it! But that was before I joined Jesmond Joggers. Running with people made all the difference, and it didn’t take me long to become obsessed. My sister Emma planted the idea of a marathon in my mind back in 2017. She’d learnt we could get championship entry to London by running a sub 90 minute half, and convinced me to give it a go! We both entered the Brass Monkey in January 2018 as our first attempt. After being off work sick for the week leading up to the race, I didn’t think I stood a chance. Miraculously I scraped through with 10 seconds to spare, whilst Emma smashed it, and London suddenly became a reality for both of us.

Looking through marathon training plans, I once again wondered what I was doing. 50+ hours a week – how was I going to fit that in?! I used to find 30 miles tough! Surprisingly, I really enjoyed the training. There were definitely days where I felt completely exhausted and had to force myself to get out, but on the whole I loved the excuse to run almost every day. I had a few niggles to deal with, one of which resulted in spending most of my money on physiotherapy, but somehow my body pushed through and I didn’t break from the increased mileage. When the weekend finally came I knew I’d done everything I could, and was praying all my hard work would pay off on the day!

Emma and I went to the EXPO to collect our numbers on the Friday night. Excitement and nerves built as we saw all the kit and energy bars/gels for sale (tasting as many as we could, so much nut buttery goodness!) and took photos with our numbers under the big ’26.2’ sign. We couldn’t believe the weekend was finally here! Saturday was spent attempting not to ruin our legs (a difficult task in the city centre of London!) and trying to carb load whilst avoiding eating so much we’d have to work harder lugging it round the next day. Piece of advice – never try to get an Italian meal in London the night before the marathon. Sleep was a far away dream on both the Friday and Saturday nights….

Before we knew it the day was here. Fuelled with porridge, banana and coffee we set off for the 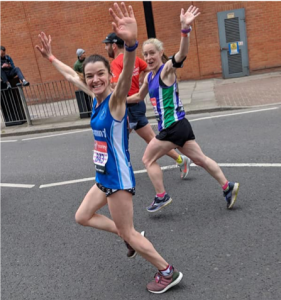 journey to Blackheath. Naively we thought we just needed to hop on and off a tube then a train, however it took 2 completely packed trains and lots of elbowing on the platform to finally fight our way on – 3rd time lucky! The championship start wasn’t the easiest to find, but finally we were there amongst people we both thought were far too speedy for us to compete with! The championship start was so special – right at the front, just behind the elite men, with the 3-hour pacer comically behind us in the general start area! Nerves were dampened down by excitement as Andy Murray started the race off. We’d decided to run together as our training paces had been so similar and we were both aiming for the same time (sub 3:15). Before long we were right at the back of the championship runners. It was difficult not to race the post box and 3-person sausage dog overtaking us a few miles in, but we worked hard to stick to our pacing plan and not get carried away.

The first few miles were mentally really tough, and I worried I wasn’t cut out for this distance. 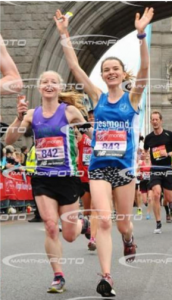 Around 5 miles in I started to feel much better, we’d settled into a rhythm and the atmosphere was building alongside the miles. Company and incredible crowd support made the time fly, and it wasn’t long until we crossed the Tower Bridge and headed out to the Isle of the Dogs, which we’d been told was a tough section of the course. Luckily we had some amazing cheers from friends and family to keep us going. Around 20 miles in, just after seeing our parents, we unintentionally picked up the pace. I remember saying multiple times ‘we’re going faster than target pace, can we keep this up??’ to which Em just replied ‘no idea!’. Em started to struggle at about 24 miles and despite my best efforts to pull her through the rough patch, she finally convinced me to go off alone. I was sad we wouldn’t get our dream hand in hand finish, but we’d agreed before hand that we’d separate if one of us started to flag. I was feeling stronger than ever thanks to the crowds and knew I could pick the pace up.

The final mile and a half was surreal – I was so focussed on getting to Buckingham Palace and the iconic finishing straight that I somehow missed seeing the London Eye, and only just clocked Big Ben! Turning into the Palace grounds I gave it everything I had left to push to the finish. I ran 3:11:56, beyond anything I thought I could achieve. I waited as close to the finish as I could to find Em, who’d managed to keep pushing at an incredible pace despite hitting the wall and finished in 3:12:58. 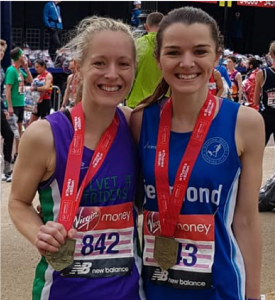 Our legs rapidly started to seize up and we almost forgot to get a photo of us at the end in our haste to stretch out and get into some less sweaty kit. I checked my phone to see the JJs whatsapp group had been going crazy all morning, I had no idea so many people would be tracking us on the app! In my emotional state it brought a tear to my eye to read all the comments on our progress throughout the race with everyone routing for us to do well. This club really is so special! From these messages I saw Kleo, who’d run with our sole club number, had managed an absolutely storming run finishing in 3:06:30.

London, you were INCREDIBLE. I smiled the entire way, even through the pain of the last 10k. I can’t imagine a better way to spend my first marathon than running most of it alongside my sister, who provided the best company/moral support/pacing. I can honestly say I loved every minute, even the tough bits!