The last cross country of the season saw the best turn out for the JJs in the club’s history! 29 club members, keen to run one of the most picturesque XC routes. Excitement was in the air as almost 1000 runners geared themselves up to finish on a high. Unfortunately, the unbelievably long queue for the portaloos left people jumping for other reasons, and there were many runners seen leaping over the fence into the woods pre-race!

With two laps to commence for the women, and three laps for the men, there was a chance to marvel at the beauty of Alnwick Castle before a downhill start that got the adrenaline pumping. Fortunately, there was a tail wind that helped build the momentum before a relentless climb. It turns out ‘the hill’ at Alwnick is made up of about five ‘mini hills’ that level off at each top (not for the ‘mini’ to understate their incline!) Unlike some of the other XCs, there was a woodland trail half way through which switched things up a bit. This led to some tight overtaking from the fast pack who had set off after the others. Just when you felt like you could no longer sustain the relentless climb, there it was – the steepest, tumultuous drop back down! Many of the JJs mentioned that the wind had blinded them while running down, eyes streaming and legs propelling down the bumpy grass declivity – thinking ‘good god if I fall I’m knackered!’ This decline was also the section which led to the finish line, meaning people could push themselves up the hill knowing there was a lovely decent to come.

Some outstanding results from the large amount of JJs that attended, including Laura Cheetham coming 3rd in the fast pack! Such great results led to the women coming third in division 2 and the men 3rd in their division. A great achievement for the club! 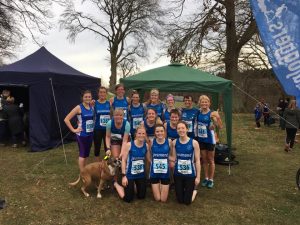 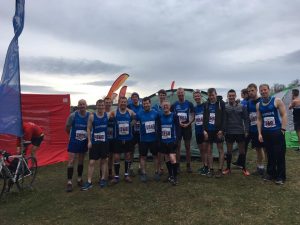 The JJs celebrated their amazing efforts as they always do – with some lovely scran.

Fortunately, Alnwick has also been chosen as the location for the next NEHL Northern Championships, an excellent chance to give the course another go.

Thanks to Gemma McMillan for the Race Report