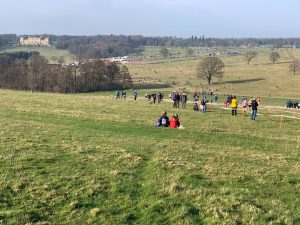 Back in the 1970’s visitors to Leeds in a sporting context would often be heard saying “DIRTY DIRTY LEEDS” but after a two hours journey to Leeds, the travelling JJs found the course at the 131st English Nationals for the men and the 86th Woman’s National anything but dirty.

A great venue greeted us as we arrived after surprisingly getting way on time from club headquarters, aka Jesmond Pool. The sun was shining and it was getting warm. In racing parlance the ground was good to firm and Lottie Rhodes, being used to normal XC conditions, was disappointed that her wellies wouldn’t be required. In fact there was not one patch of mud on the ground at any point of the course. Leeds lass Kate Winstanley made a welcome return to the JJs fold, bouncing over in her enthusiasm at the prospect of a race over her favourite discipline, cross country!! The tent was erected and cakes brought out, the JJs had arrived, made complete with the planting of the JJs banner in the ground amongst the large collection of banners and tents. The atmosphere was immense and a fitting venue for one of the races of the season. 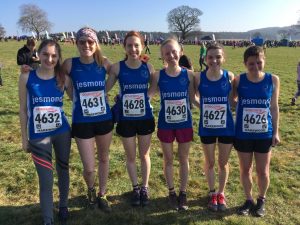 Before the race the lasses had a quick confab about racing attire and it was collectively agreed that shorts and just a vest were in order for the 5 mile course. Lottie was too cool for school as usual and went for sunglasses to give the effect that we racing in southern Spain rather than Yorkshire in February. We had previously run the course for the Northern XC last year so after a brief discussion of what was to come; the lasses had their pre-race photo taken and made their way to the starting pens. Laura Cheetham and Molly Rebecca set off at good pace to made good headway up the opening hill with the rest following in the stampede of 1000 female starters. Molly and Laura took the fight to the national and both steadily moved through the field on both of the two and a half mile laps. Kate Black followed making good progress. Laura Cheetham continued her great form to just miss out on getting inside the top 100 with a 103rd place and a finishing time of 33:13, with Molly Rebecca a minute behind in 34:18mins in 149th place. Amazingly they were 4th and 7th North Eastern females to finish respectively. An amazing achievement in a field of over 1000 females. Kate Black was 549th in 41:11, Lottie 750th in 44:17, Beth Deutsch 878th in 48:17 and Kate Winstanley on home turf in 911th in 49:17. The women were a credible 50th team overall out of 114 complete teams, finishing 5th North Eastern club. A great achievement. 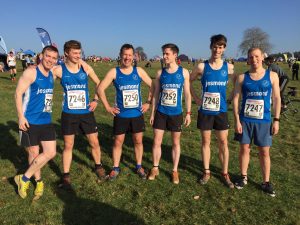 So it was on to the men’s race and the 131st racing of the men’s national. Joe Cherry and Jonny Law were fighting over who was going to be at the head of the JJs pen, neither agreeing who should be there. In fact neither of them wanted to be at the front and I had to step forward with a solution. Joe chose the closed fist with a leaf in and took his position at the front of the line. The men duly lined up in their pen, the anticipation being too much for Chris Lawrence who had a nervous stomach as we all found out as we awaited the gun. The start line fell eerily quiet, 2000 men waiting to charge in to battle up the first hill. As Stefan Haass pointed out, this felt like Braveheart. We went on the B of the bang when the gun went and the charge up the first hill was on. A slight slowing halfway up the hill meant they we had a slight disruption to our stride but were soon back on it again. The men ran a slightly longer course, going further up the hill than the women’s course. Mentally the two laps felt better than the normal three that we do. Joe and Jonny were in full racing mode, Jonny hoping to dispatch the young pretender as he had done a year earlier on the same course with Harry. Joe took to the firm course like the off road runner that he is, leaving Jonny to try and battle through to catch him. Rob Willers and Chris Lawrence swapped place through the second lap, with Rob moving into third JJ on the course Simon Wells, returning from the worse man flu he has ever had, pushed his aging body up the hill to be told that from Beth Deutsch at the top of the course that Chris was just in front. Don’t ever believe Beth Chris was nowhere to be seen. Joe Cherry held off Jonny Law to finish 536th in 45:51 with Jonny Law in 674th with 46:36, Rob Willers was 1173rd in 51:17, Chris Lawrence 1286th in 52:27 Simon Wells 1611th in 56:59 and Stefan Haass bringing up the rear in 1697th place in 58:18. The men finished 112th out of 143 teams with notable clubs such as Blyth, Saltwell, Barnet & District AC and Fitmums and Friends behind us!

A great day and a great race, it was great to have a presence at the Nationals, a race that is the FA Cup of Cross Country running. Well done to all those to put their spikes on the line!