“You must to Pomfret, not unto the Tower” – but to the Northern’s XC! (minor adaptation from Richard II, Act V, Scene 1)

The great 17th century Quaker, Dissenter and traveller, George Fox, enthused how the “delight and pleasure” of Pontefract, “arrest the traveller’s attention”.  However, the four brave lassies and four brave lads that made their way south to Yorkshire there were greeted more by a maze of confusing retail parks than Fox’s “pleasing and picturesque prospect”!

The traumas of travel and parking over (well I was traumatised by it anyhow, and I wasn’t even driving!), and a mile walk across rough ground, we made it to a somewhat bleak Pontefract meadows racecourse.  Alex, Gemma and Laura meanwhile had tried the make their way in to the Outlet village instead ‘by a mistake they said’ (having Simon beaten them to using the ‘I’ve got flu’ excuse, they were trying Plan B instead!)

Pontefract racecourse is reportedly a ‘a thoroughbred horse racing venue‘ ; I think I was the donkey that had somehow taken a wrong turn at Scarborough (or possibly at Whitley Bay!). 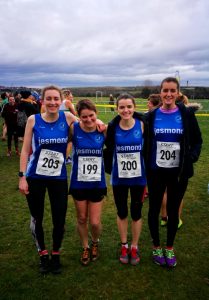 15pm prompt and the lassies were into the pens and off … ‘too fast’ we all said afterwards.  The reports on the racecourse that state “the final 3 furlongs of the track are uphill, making it quite testing” were for sure true … especially into the headwind.  Laura, our Class 1 thoroughbred, made light weather of it though, breezing to a convincing position in the very strong and fast field, early after the Clubhouse turn, while the other three of us were trotting, although far from badly, round behind our frontrunner (although my trotting definitely took everything that I had in the tank). The going wasn’t too bad; yielding to heavy.  We finished in 30th position overall, of 45 counting teams: Laura 65th; Kate B 195th; Kate L 218th and Gemma 324th  (of 376 finishers).  Not bad for a select four from a small club!

Only racehorse Laura made it back in time to see the lads set off.   Their three laps were hard going and the ground heavier, but all four breezed into a strong position in a fast field. Sadly, despite his best efforts, Chris couldn’t quite keep Mike (now Ilkley) off in   the final straight despite all best efforts to shake up.  Sadly, with only four runners the lads didn’t have a counting team, but finished impressively: Jonny 289th; Vincent 432nd; Chris 440th and Alex 570th (of 704 finishers).

Greatest of thanks to all for participating and especially for Chris and Gemma for driving, in what were rough conditions heading home.